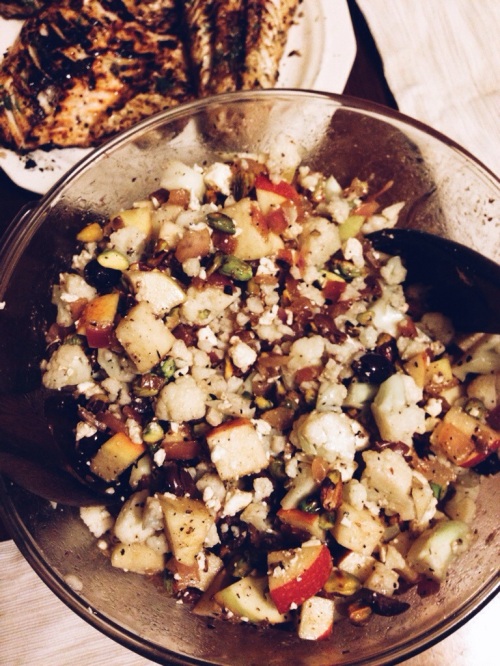 A Lesson in Butter 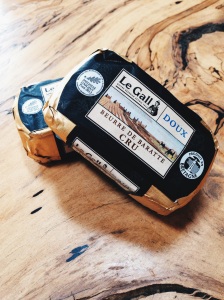 “Butter is elemental, just churned cream, but the very best ones hold flavors so sophisticated and elusive that they dazzle your palate while comforting you like a child.” (Oliver Strand, “Solid Gold”, May ’14, American Vogue)

I don’t ask much for when my husband has to go to Europe for work, just bring me back some butter. French butter to be exact, and make sure it’s ‘cru’, aka raw. French butter is also cultured, meaning a bit tangy and sour, whereas North American butter is sweet. We want cultured butter, not only for the taste but for the added benefit of gut friendly probiotics.

The Butter Vikings in Scandinavia are so serious about their churned craft that they make one specifically for the king of Sweden aptly called King’s Butter that is cultured butter with pearls of sweet cream dripped into it with the tip of a knife and gently folded in, allowing a taster the pleasure of experiencing bursts of sweet gold nestled in tangy, perfectly salted, creamy butter. The king, who (gasp!) once hated butter, is now a convert thanks to these artists. (I know, right? Let’s all book our plane tickets together, right now, and head to Sweden to buy out the entire stock.) The Vikings also purvey their wares at Noma, René Redzepi’s Copenhagen restaurant that elevated foraging to haute cuisine.

We need to eat more butter: it is high in vitamins A, E, K2, and selenium. Selenium and vitamin E are also powerful antioxidants. “Individuals receiving optimal vitamin A from the time of conception have broad handsome faces, strong straight teeth, and excellent bone structure.” (Sally Fallon, “Why Butter is Better”, Weston A. Price Foundation) Naturally, and much to my husband’s delight, I ate pounds of butter while pregnant, and will continue to do so whenever I can get my hands on those beautiful, golden nuggets. Not to mention, the kid needs to taste good butter- have to develop those taste buds early….

To get your hands on some cultured butter in the US, check out these links:
Vermont Creamery
Organic Valley
Murray’s Cheese

Want to make it yourself? I commend you:
NY Times
Food and Wine Magazine
Food Republic

And to read more about the health benefits of butter (Yes, butter, can be part of a healthy diet. Everything in moderation, my friend):
Mark Bittman for The NY Times
Bon Appetit Magazine
Weston A. Price Foundation

Cooking not only involves food, but all the accoutrements that help facilitate the process. 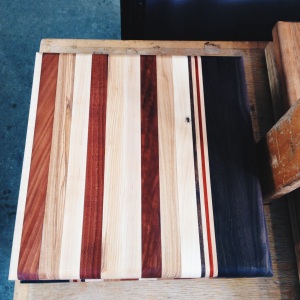 I was recently at the Lakefront Festival of Art, hosted by The Milwaukee Art Museum, this past weekend. While the fair was inhabited by numerous regional artists, there were a few items that stood out to me. This wood piece by Schlabaugh and Sons would make a gorgeous cheese or charcuterie serving board for your next gathering. 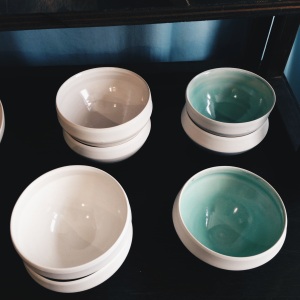 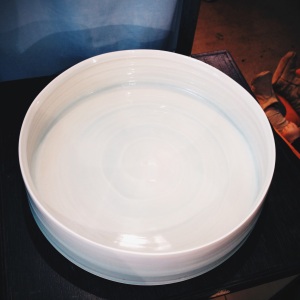 I love beautiful ceramic pieces with clean lines and minimal colour. These vessels by Anderson Bailey are not only gorgeous in themselves, but they wouldn’t compete with the aesthetics of the food you nestle within them. 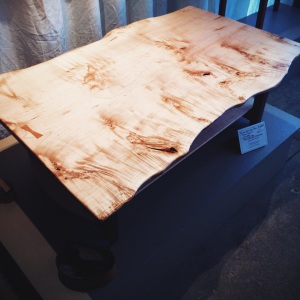 I know… live edge tables are kinda’ at the tipping point of overly trendy, but they’re still beautiful pieces. I have one in our dining room; it has become a statement in itself which helps keep our decor to a minimum. Sweitzer & Sweitzer will make custom tables for you. 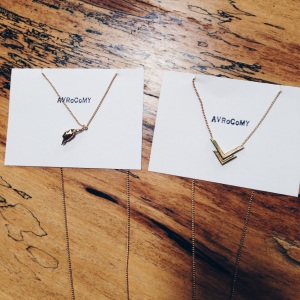 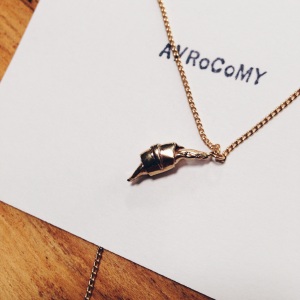 And last but certainly not least, you’ve gotta’ have some bling while entertaining your dinner party. My friend Allison Jenetopulous can make custom designed brass pieces for you, as well as designing her own brilliant line. I had her make a croissant for me- who doesn’t love croissants? 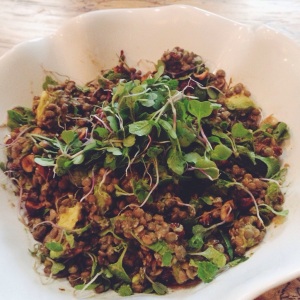 I’m not really sure what compelled me to finally start a food blog after just having given birth. I guess I somehow think I have a lot of free time. When my son was first born I was a zombie, barely managing to eat once a day when I could remember to feed myself. I subsisted on granola bars I had made & froze while pregnant for that very reason, and takeout. Lots and lots of takeout. After a few months I decided I had gotten into enough of a routine(ish) that I could attempt to cook again; It took me about 2 days to make a salad, literally. In my mind that was progress. This salad I’m about to share can be accomplished in about an hr or so (give or take how many infants are clamouring for your attention and whether or not you have to strap the kid into a front carrier to accomplish anything that day) and it will taste healthy yet indulgent. 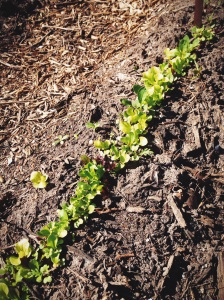 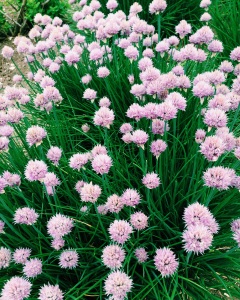 One of my biggest inspirations is Heidi Swanson of 101cookbooks. Heidi is my cooking goddess actually, I bow down and kiss her kale. Her recipes remind me of San Francisco where she’s based, where I used to live. She has inspired me to make hearty salads using the wonderful produce she finds at the market. This is an adaptation of one of her creations. I changed the dressing a bit to make it more of a vinaigrette, and I fried the hazelnuts in oil instead of toasting them because I wanted the salad to taste a bit more indulgent. I think it would also taste good with some chive blossoms, although I had that epiphany after the fact.

A side note: micros greens are basically a rebranding of thinned out seedlings from the garden. If you don’t have a garden you can substitute sprouts, pea shoots, baby spinach, etc.

•a few big handfuls of hazelnuts, chopped
Fry the hazelnuts in a couple of glugs of olive oil. When they get to a deep brown, drain on paper towels, salt liberally.

•1.5c uncooked green Lentils du Puy
Bring 2.5c salted water to a boil. Add lentils, turn the heat down all the way, simmer for about 20min or until al dente. Drain, cool to room temp.

Dress the lentils with the vinaigrette in a big serving bowl. Add the rest of the ingredients in and toss to combine. Enjoy! Serves about 4, although this recipe easily doubles (and makes great leftovers to take for lunch the next day).

The kid was a fiend for it; from the restaurant Wolfe Peach in Milwaukee. 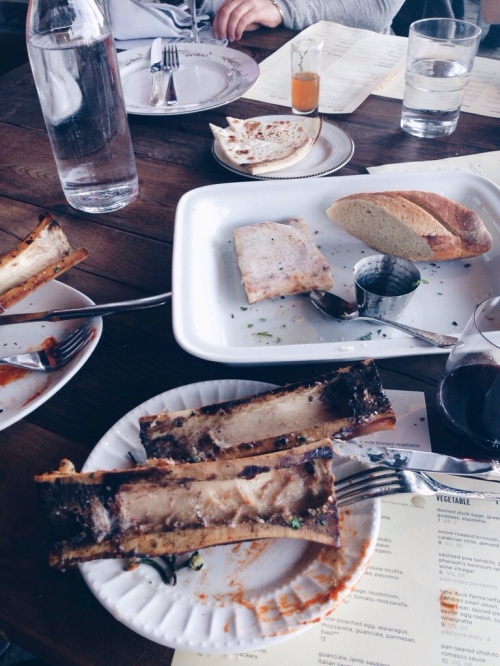 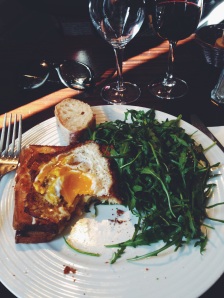 My Croque Madame in Paris

I know, lame me, my first post is a list of things to read. “Isn’t a blog supposed to be of your voice?”; “What is it that you want to share with the world?” I’ve asked myself many times while contemplating starting a food blog. Why start a food blog now when everyone and their dog has a food blog? What will my focus be? I’ve never been to culinary school, what makes me a self-appointed authority on food that I now can tell you what will taste good and what will not? What you should make and how?

I’ll admit, I’m pretty obsessed with food, and I’m not sure why. On a purely fundamental level, food sustains life- calorie in, calorie expended, mineral & vitamin in, mineral & vitamin used for metabolic functions, and so the wheel turns. Growing up, my mother did all of the cooking, and growing of vegetables. My mother is Spanish and Filipino, but most of the food eaten while growing up was Filipino. I ate fish & rice for breakfast, or eggs and rice for breakfast; everything with rice. The first time I ate eggs with toast (I was 16), I thought it was the most novel and genius combination. French fries at 12yrs old became a lifelong obsession. We always ate home cooked meals, our veg always came from the garden, and our meat came from the long drive over to the farmer, but back then (the 90s), that wasn’t trendy, that was functional eating.

When I was in my early twenties I lived in the beautiful city of Montreal. Many of my friends’ French mothers developed my non-Southeast Asian palate: I ate cheese, lots of it, and I learned how to select a good one for a dinner party; I learned how to make a proper salad vinagrette that has become a staple in my cooking (and the recipe has been asked of many times, which I will share with you later); I ate seared fois gras (the only way it should be served, and not with the sweet, jam-y sauces that have been fashionable as of late), learned how to make ratatouille, a proper quiche, how to prepare and serve salmon, and how to prepare and make a gorgeous summer salad for that vinagrette. My friends’ mothers taught me how to cook, and they turned me into a food snob basically, but they also made me realize how pleasurable a really good meal could be. Not to mention the wine that was always present, dinner became a glamorous affair.

After Montreal, I moved to San Francisco in the early 2000s. San Francisco was such a pivotal point in my life, it changed me for the better and basically formed who I am today. While living in Montreal I partied hard- cocaine, ecstasy, those were fun. My significant other at the time posed an ultimatum; and so I entered rehab 6months after moving to SF and cleaned myself up. I went back to school (art!), and became absorbed in the political atmosphere that encompasses the city by the Bay. Food politics, as I’ll call it, was burgeoning. I had always had a naturalistic & healthy bent (read: I was anorexic for a couple of years, between the ages of 19-21, and being “healthy” was a great cover to disguise my lack of caloric intake. Furthermore, while consuming obscene amounts of drugs, I was always paranoid I would fry my brain and become that urban legend of the dude who thought he was an orange and asked people to peel him; I became obsessed with health to “counteract” the effects of the drugs. I’m not sure if it worked, but at least I don’t ask people to peel me….), so I threw myself with wild abandon into the healthy lifestyle that is San Francisco. If you ask me, San Francisco & Oakland were the kale & backyard chicken coop originators, not Brooklyn. Brooklyn just has a louder voice being so close to media giant NYC. Food, in San Francisco, was not only sustenance and pleasure, food could also be a political voice and identity. I could have a real effect on the world just by choosing where I shop (Alemany farmer’s market, the Ferry Plaza was only for visiting guests since it is much more expensive), & what I choose to eat. How empowering. I also fell in love with the writers in San Francisco waxing on about food, be it a recipe, a farmer, or the next hot chef. Sometimes those authors were so carnal you thought you were reading a porn magazine. I fell in love.

And so, here I am, a lady with a list of things I find interesting enough to post after a lengthy introduction. I have a recipe for you on Mon, check back in.

Sugars need to be broken down and labeled: http://time.com/2826750/theres-even-more-sugar-in-soda-than-you-think/

If you’re in LA, and you’re going to Dwell on Design, check out Coolhaus and tell me all about it, it sounds amazeballs: http://www.dwell.com/dwell-design/slideshow/coolhaus-architecturally-inspired-ice-cream

I came across an article in Vogue about the antibiotic use in chickens, and how it could be linked to an increase in UTIs (urinary tract infection).

Read about it here in The Atlantic.