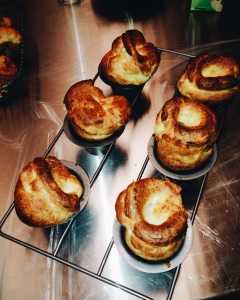 A week ago, I assisted my friend Laurel Ziemienski on a few video shoots she was food styling for Kenmore appliances. It was a lot of fun to be an assistant again: no pressure to perform, and my curiosity reignited by learning a few new tricks. Food styling is not the same as cooking for the most part: all the shoot really cares is that it looks pretty. So that French cut standing rib roast pictured above? Totally raw on the inside, blow-torched to perfection on the outside. And the bowls of pasta she food styled? Pam’d to perfection. Yes, Pam, the spray oil you cook with.

Tweezers, and paint brushes are as integral to Laurel’s kit as a good set of cookware. As an assistant, my kit consisted only of a few things: my Shun 8″ chef’s knife, my Wusthof Santoku knife (so great for veggies), an apron, and oven mitts. 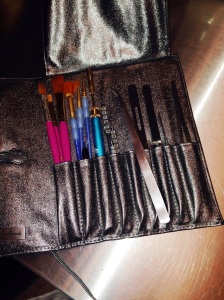 We cooked on bunsen burners behind the scenes like mad scientists, whipping up flavourless aioli and ganache to get to set ASAP (remember, it just has to look good, and damn my aioli and ganache were on point aesthetics-wise). I made so much pasta dough because we needed a shot of dough from every angle and for a few takes, I felt like I should have applied to an Italian kitchen to work in after the shoot was over. And I did a lot of shopping for her while she had to remain on set.
All in all, I would probably assist again. It was fun to get out of my regular work routine and get busy with my hands; I love the meditativeness of preparing food.

One week later, I had my friend’s daughter’s 1yr birthday party to attend, and I had asked the host if I should bring anything to share. A few days before the get together, I started to think about all of the cheese butts in my fridge. And you know exactly how this happens: you overbuy cheese like I do. I had at least 2lbs of cheese sitting idly in my fridge, just waiting to grow mold. At first I thought mac ‘n’ cheese, but the husband said I should bring something that’s dip-able and more party-app-like, so we naturally thought of Fromage Fort.

Fromage Fort is a fancy sounding way of coining ‘leftover cheese dip.’ And it’s brilliantly easy to make. You basically just take whatever cheese you have on hand, put it into your food processor with a little wine and garlic, and Voilà! You’ve got yourself an amazing cheese spread. If you do a little research on the internet, there are many versions of it- some say add butter, some add herbs, but it’s generally the same formula. The taste will change each time you make it when you use different cheeses: the more blue cheese you use, the more of a blue cheese spread it will become since blue can be ‘quite tasty’. That being said, try and use blue sparingly if you don’t want that particular flavour to overpower the whole thing.

-1lb mixed cheese. For this particular version, I used brie, camembert, an asiago/fontina mix, drunken goat, & gruyere. It’s best to grate the hard cheese so that it blends better. (Or you can be like me and slap your forehead after realizing you should have done so and spend a few extra minutes getting it to the right, spreadable consistency) ***If you only have hard cheeses, this is where a few pats of butter can come in handy to help the spread come to a better consistency***
-2 small cloves of garlic, smashed. If that’s too strong for you, just use 1
-1/2c white wine. I had Pinto Grigio on hand, but any dry thing will do
-a large pinch of parsley, roughly chopped

-Throw the cheese and garlic into the food processor (and butter if you need to). While it’s going, pour in the wine and blend until it’s the perfect consistency you like. I like it smooth, others like it a little crumbly.
-Add the parsley when it’s blended to your perfect consistency. You can either be lazy like me and throw it into the blender and pulse a few times, or you can make it more “food style-y” and mix finely minced parsley by hand into your spread until it looks perfect.
-I like to serve it with cut up baguette and crackers. It’s also really delicious spread of slices of baguette and broiled for a minute or two- it’s really up to you.

So here’s where the food styling influence came to the rescue for me: After I had made the spread, I started scooping it out into a dish, not really caring about aesthetics- it looked awful. So, I took a pastry bag and filled it with the cheese and piped the cheese into a serving dish instead. Obviously you don’t have to do this, but it did make the dip look much more appetizing. And aesthetics is as much a part of the appeal of eating food as is the taste.