For those of you that know me personally, you know that I fly fairly often. Whether it’s a short domestic trip, or a long-haul around the world, I almost always fly with my own food. I do this mostly out of necessity because of my soy allergy (it’s in Everything processed), but also as part of my flying ritual. If you fly frequently, you probably have a ritual as well, and I would love to hear about them in the comments.

I like to make non-perishable items to fly with, like this salad that was inspired by the NYTimes, and I like to bring a lot of it. After claiming my bags, possibly going through border control, maybe with a toddler in tow, and getting to my destination from the airport which can sometimes take up to 2hrs depending on where I’ve landed, by the time I reach my accommodations I’m exhausted, hungry, & possibly severely jet lagged. Searching for food after all of that just makes me want to cry. Which is why I will bring more than enough food on my flight(s) so that I can unpack, tend to the toddler if he’s with me, and collapse, ready for the next day with wide eyes & a bushy tail.

Along with this type of salad, I like to fly with non-high-maintenance fruit such as apples, oranges, grapes, or stone fruit when in season. I’ll usually throw in some Lara bars, and a good bar of chocolate too. If the toddler is with me, I bring copious amounts of cheddar bunnies & animal cracker packets. The above mentioned fruit is on the toddler’s “approved-foods” list (which is mostly diminishing in length *sigh*). I also like to make farçou for the toddler to snack on in the most likely case he hates everything there is to offer at the airport/on the plane. I will also pack my suitcase with peanut butter and almond butter packets, and squeeze packs of fruit purees for the toddler when we reach our destination.

Back to the adults: the great thing about this salad is that it doesn’t have any meat or dairy in it, which means you could fly from NY to Tokyo with it, and it will still be decent to eat by the time you get to your hotel 20hrs later. And if you don’t have the exact same ingredients as I did for this salad, don’t sweat it. Neither did I when I loosely followed The NYTimes’ version of this salad as well. Any sort of veggie roasted would be great in this, and toasted almonds, and/or walnuts would be great too. If you have a lemon, not a clementine, use that. And if you only have apple cider vinegar instead of sherry vinegar, that will taste great too. Don’t worry, it’s just a salad:

-1c green or black lentils (these hold their shape when cooked)

Place lentils, bay leaves, & salt in a pot with 3c of water. Bring to a boil, then reduce to simmer for 20min, or until fork tender. Drain in a fine-mesh sieve/collander. Set aside to cool (or run under cold water until cool to quickly reduce the temperature as I did), and discard the bay leaves.

Pre-heat the oven to 425F, and chop into bite-sized pieces:

Throw all of this onto a roasting pan. Drizzle with olive oil, salt & pepper, toss/mix to combine, and roast for about 20-30min. Just until it looks soft & the edges of the chopped veggies are starting to char. Turn the oven off and leave in the oven for about 20min. I’ve discovered that when you do this, the vegetables start to dehydrate a bit, maintaining their shape when you toss them in salads. I don’t know about you, but I hate mushy roasted veggies that don’t hold their shape.

-Dijon mustard (about a tsp or so)

-The juice of 1 large clementine/mandarine

The amount of oil & vinegar is to your taste, which is why I’m not giving you amounts. This is good practice when making any vinaigrette. I normally do more oil than vinegar if that helps, and I’ll start off with a tsp of mustard & take it from there taste-wise. Whisk everything together.

In a dry pan, toast some chopped pistachios until fragrant. Be mindful you don’t burn them (I’m constantly burning any toasted nut I do…)
When the lentils have cooled, place them in a large bowl & splash them with the dressing. You want just enough dressing to give them flavour, but not so much that the pool of liquid will get you in trouble when going through airport security. Add the veggies, toss to combine, & add more dressing if needed. Add in the pistachios, toss to combine. Some chopped flat-leaf parsley would be nice to toss in this too.
I like to keep the plastic to-go containers from the Whole Foods deli section for flights as I can just recycle them when I’m finished eating & not have to worry about carrying tupperware with me for my whole trip. And I can find disposable cutlery in any airport to eat with.

This will fill about 3 medium-sized containers, perfect for the airport & dinner later. 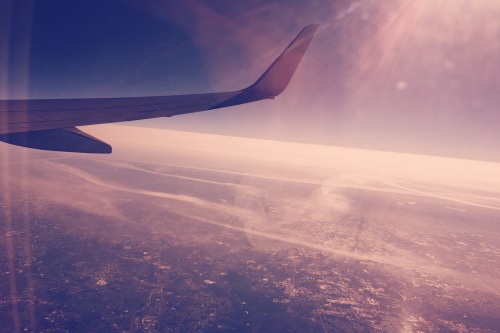